I was thinking whether or not to improve the art of RPG Playground. Not that it is currently bad, but there is probably room for improvement.

To further investigate this, I want to see what old-school and modern RPG’s look like. What kind of standard they have for their graphics.

Before diving into examples of art in role playing games, we need to know the different types of graphics. And with types, I mean the different graphical projections. Because they define how a game looks and feels.

Below you can see some classic examples. The leftmost projection is the standard top-down oblique projection. Games like The Legend of Zelda, Hyper Light Drifter, classic RPG Maker games, and even our very own RPG Playground uses this kind of projection. The benefits are that it’s really straight forward.

Although it looks nice, there is a drawback. Controlling the hero with the keyboard becomes confusing in such a setting. Because “up” can be interpreted as “left-up” or “right-up”.

Real 3D projection with perspective is used a lot in modern games, but has a whole different art process. Art is not drawn, but 3D modeled, and textures are put on top of it. Games that use this kind of 3D projection are Divinity: Original Sin, Neverwinter Nights 2,  Titan Quest, … .

All classic games use tilemaps to compose their levels. This means a fixed set of square tiles are used to compose a big level. For old technology this is used to save computer memory consumption. Modern technology allows you to use plenty of memory, and so it is not necessary anymore to use tilemaps to compose your levels. Some games now use one big image for their level. For RPG Playground, the user needs to be able to make their own levels in a fast an easy way. The best way to do this, is to use a tileset. We can’t really rely on our users to be all artists that can draw nice images by hand (I sure can’t!).

Because we want to support action-based combat, it’s hard to go for isometric projection. Because when you press the up button, where do you want your character to go? Left-up or right-up? So therefore, top-down projection is the way to go.

For reference, below is a recent screenshot of RPG Playground.

Midora is a 2D action adventure that started out as a Kickstarter campaing, but unfortunately seems to be stuck there. Their development seems to take way more effort than expected. It seems to me they need something like RPG Playground ;).

Their graphics really have an old school feel to it, and resembles The Legend of Zelda a lot.

Crystal Kingdom uses traditional pixel art. The high quality art you can see below takes a lot of time to make, but the end result is astonishing.

Zenonia is a mobile game that started out with true pixel graphics. But its latest releases have gradually moved towards more detailed painted art. Versions 1 to 3 all feature a top-down pixelated tilemap.

Starting from Zenonia 4, the graphics style is hand painted instead of truly pixel art. Especially the environment doesn’t look like pixel art at all. But it still has an old-school feel to it. And that is probably because it still features the top-down projection where the level seems to be composed of different tiles.

Zenonia 5 also has this hand painted look, but even takes it a bit further by dropping the tilemap. The level looks like fully painted right now.

When I think of an amazing looking game, I think of Bastion. The art in that game is absolutely astonishing.

The levels are completely hand-painted, isometric, but don’t seem to use a tilemap. They look hand painted, with some recurring graphics. 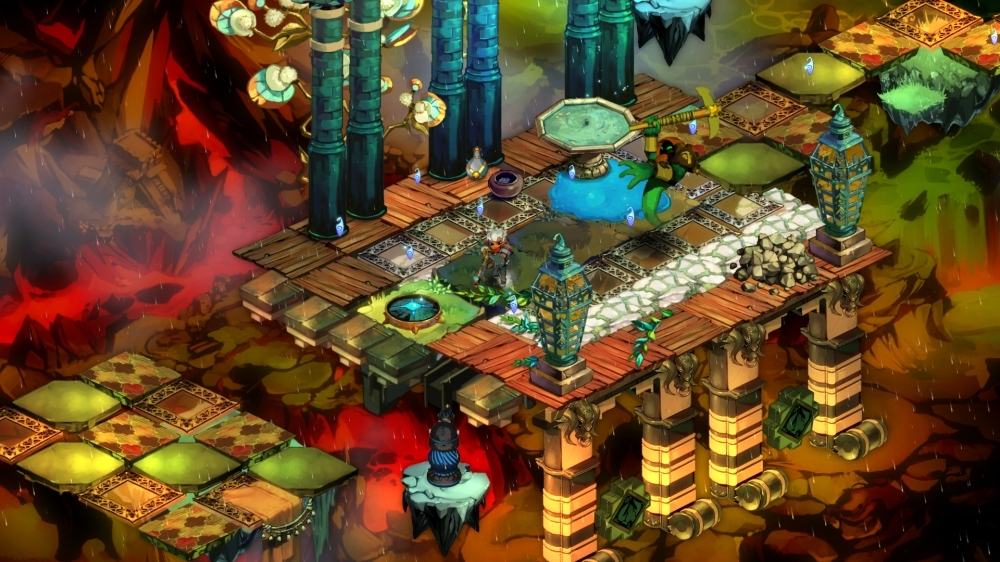 When mentioning Bastion, we also have to mention the next game of that same studio, Transistor. Eitr falls into what I call “Modern pixel art”. It is still pixel art, but can definitely be distinguished from the pixel art of classic games. The screenshot below shows some nice shading around the fire and on the main character.

Children of Morta has the same indie feel to it as Eitr. Modern technology allows more colors, so the pixel art looks different than when a color palette needs to be used.

But when you look at the screenshot below, you can see it features dynamic shadows on the pillars. Nice combination of an old look with new techniques.

The graphics of Crawl have a true distinctive feel to it, although they are pretty simple. And the character animations are truly superb. Gamasutra had a nice article recently about how this distinctive art style came to be. Another nice example of pixel art with a modern feel to it.

Although Megasphere is a side-view platform game, I still want to mention this. It combines old-school pixel graphics with the modern pixel shader technology. The reason why I definitely want it in this post is because it’s the only game that properly can combine these two. I have yet to see a top-down or isometric game that can use shaders like this.

Although Chasm is a side-view platform game, I want to include it here because it has a very nice art style. Simplistic, modern, but still with a old-school pixel art touch. Very cool indeed.

Some 2D game artists are redefining pixel art into a modern look, and are doing an excellent job. But for the time being, it seems the current graphics of RPG Playground are still up to par. Besides, my users are requesting “a battle system” so hard, that improving the graphics seems like a waste of time for now. So the pixel graphics of RPG Playground will stay there for the next couple of years.

One thought on “The art of modern 2D Role Playing Games”